There are a number of treatment modalities for Pelvic Venous Disorder (PeVD) or Pelvic Congestion Syndrome (PCS).

Many patients with the symptoms of the condition may not require a procedure or operation at all and can have their symptoms managed well with targeted supportive treatments. These include

These are procedures done to correct the abnormal blood flow and reduce the pooled blood volume in the deep veins of the pelvis. Different procedure options are required depending on the precise location of the problem in the pelvic veins, whether further pregnancies are planned and what the symptoms are. This emphasises the importance of an accurate diagnosis as well as symptom assessment. These procedures may need to be combined in patients where the veins at multiple sites are involved.

When the source of problem are the veins draining the ovary, they can be treated with special platinum coils using a key-hole technique. The procedure may be a day-surgery procedure or may need an overnight stay and usually requires a short general anaesthetic. It is performed under X-ray control and guided by special ultrasound catheters that can view the veins from inside the vessel (Intra vascular ultrasound). 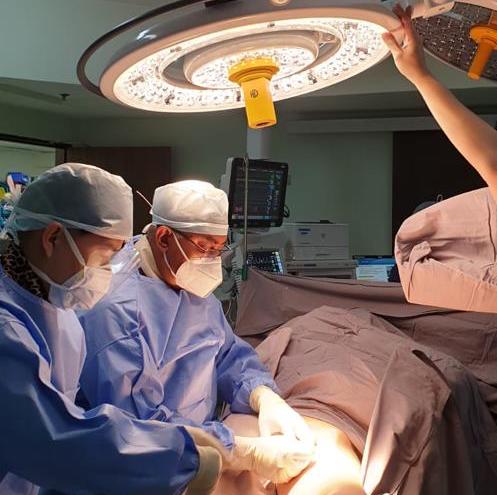 These are used to close or block off the diseased deep veins in the pelvis. A drug, called a sclerosant is injected into the target veins under X-ray and Ultrasound guidance to cause closure of these veins and decrease the venous blood volume in the pelvis. Sclerotherapy is also often used when there are varicose veins in the groin or private areas around the vagina. Sometimes, this may be combined with the use of medical glue to further reduce the diseased blood volume.

This may be required when blockages in the large veins draining the legs and the pelvis cause venous hypertension and congestion in the veins around the uterus, vagina and in the pelvis. A metallic tube (called a stent, similar to but much larger than a heart stent) is placed within the blocked vein to relieve the blockage and allow the blood in the veins to flow normally. The procedure needs an overnight stay and usually a short general anaesthetic. It is performed under X-ray control and guided by special ultrasound catheters that can view the veins from inside the vessel (Intra vascular ultrasound).

These operations are very rarely needed, and only for patients in whom severe blockages in the veins threaten the function of the kidney. Known as Gonadal vein transposition surgery, this is a more major procedure and ideally requires the surgeon to have specific training and experience in deep vein surgery. Fortunately, very few patients will require such an operation.

All surgical procedures at the Venus Clinic are offered via our clinical vascular surgery partners at the Harley Street Heart and Vascular Centre based in Gleneagles and Mount Elizabeth Novena Hospitals, where Dr Ram is the Director of Vascular Surgery and the Senior Vascular and Endovascular Surgeon.