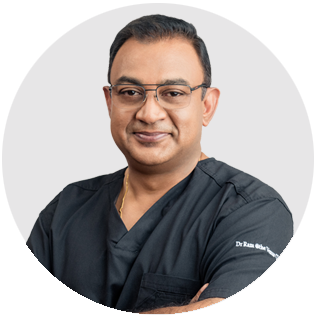 The Venus Clinic is led by Dr Ram (Sriram Narayanan), our Senior Vascular and Endovascular surgeon. Having initially qualified in India, he was trained in gastro-intestinal, liver and thoracic surgery, transplantation and then vascular surgery in the UK at Liverpool, Nottingham, Cardiff, and London, before becoming a Consultant Vascular Surgeon in the UK. His advanced training in deep vein surgery was as a Senior Registrar and Vascular surgical fellow at the Imperial College NHS trust hospitals in London, based at the Charing Cross and St Mary’s Hospitals. He also trained in laparoscopic surgery at Strasbourg, France and in endovascular surgery at Leipzig, Germany.

Dr Ram moved to Singapore in 2011 as a Consultant Vascular Surgeon at the Tan Tock Seng Hospital where he served as the Chief of Vascular and Endovascular Surgery and Adjunct Asst Professor to the Yong Loo Lin School of Medicine for over 6 years. He was a Core Faculty Member of the National Healthcare Group Surgical Residency programme, an MBBS examiner for the National University of Singapore and supervised Masters and PhD students at the Nanyang Technology University. He is also a Director and the Senior Consultant Vascular and Endovascular Surgeon at the Harley Street Heart and Vascular Centre based at Gleneagles and Mount Elizabeth, Novena Hospitals (part of the Parkway Pantai Group of Hospitals) in Singapore.

Dr Ram is recognised internationally amongst his peers as a researcher, key opinion leader, trainer, and mentor for endovenous and deep vein surgery. He was amongst the first to develop vein stenting and intra-vascular ultrasound in Singapore, venous glue ablation for venous leg ulcers and duplex ultrasound assessment for pelvic congestion syndrome. He has published extensively on various aspects of vascular disease and is a regular faculty member at major international vein conferences. He, along with the Venous Clinic team, has also run training courses in the UK and Asia on Pelvic Duplex ultrasound for PCS, intra vascular ultrasound for deep vein disease and vein stenting.

A British-Asian who has made Singapore his home, the Venus Clinic is a product of his vision to bring together his two decades of experience of clinical practice, research, teaching and training in the public and private sectors in the UK and Singapore - to create a unique ecosystem providing comprehensive care for women suffering from PCS or Pelvic Venous Disorders.